Thrilled to share this five-star review of No Entry 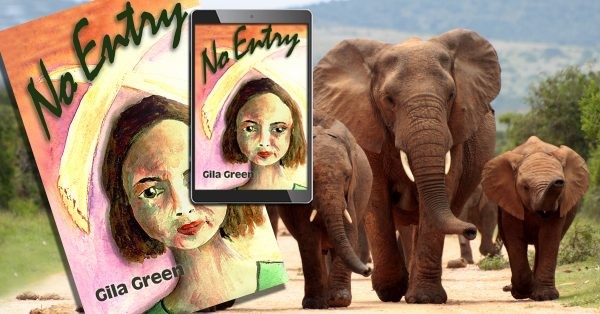 Thank you Kathy Hauswirth for your review of No Entry on your beautiful site: First Person Naturalist.

There's a continuing trend here at First Person Naturalist–publishers sending me nature/enviro-themed books to read and review. No Entry from Gila Green at Stormbird Press is the first Young Adult (YA) novel in this vein that I've been asked to read, and I'm glad it came my way.
(Before I get into it, readers who are looking for more of my nature writing, please visit me at my Loving the World landing page. I also post some of those same columns on a Facebook page @LovingWorldNature).

In No Entry, Canadian teen Yael is sent to a South African conservation camp following a sudden, life-altering trauma that has rocked the whole family. She is the daughter of a zoologist and a veterinarian, so it's no surprise that she is taken with the animals there, from orphan elephant Afua to a host of creatures roaming the adjacent Kruger National Park game reserve–rhinos, more elephants, wildebeests, giraffes, etc. It's not long before the subject of poaching elephants to gain their valuable tusks enters the picture, and it is a severe slap in the face of all this wild beauty. Yael is heartbroken to see photos of the aftermath, and later she reels after stumbling on an elephant victim quite close to where she is staying.

While the devastation wrought by poaching is a central theme, Green is skilled at layering the tale and its protagonist with many elements that keep the story fresh and cohesive. Seventeen-year-old Yael is a dimensional character who takes in the fiery personality of her new friend Nadine, eagerly awaits her boyfriend David's visit, struggles to cope with the recent , senseless loss of her brother, and puzzles over some of the goings on at the camp. She witnesses the complexity of South Africa–quite wealthy landowners juxtaposed with squatter camps. She admires and forms a bond with ranger Sipho, who comes from poverty but finds work at the complex. He lights up when he talks about the refuge's animals.

Yael experienced a haunting sense of helplessness in the face of her brother's death, and a stealthy scenario that comes to light at the camp brings up similar issues. Rough, greedy characters are ready to kill to protect the wealth they are gaining through brutality toward the elephants. When things heat up, she must keep a level head and fight her fears. It's unclear who she can trust, and she feels overwhelmed and alone.

No Entry manages to underline a very real threat while simultaneously offering characters and relationships that draw the reader in and keep the story moving at a good pace. Yael is a teen heroine to be admired–she deals with a spectrum of emotion but can play it cool when the stakes are high. She treasures David's support but can go it alone when silence is the safest strategy. Yael may be fictional, but her very real search for her place in the world and for how best to stand up for her beliefs is universally recognizable. As a not-so-young adult reader, I read an echo of my own teenage concerns and puzzlings (which seem not very long ago) in Yael and cheered when she navigated tricky waters to arrive at an unexpected solution. No Entry is worth the read. It reminds us of cruelty from which we cannot turn away, but also the human capacity to stand up and do the right thing, even in the face of grave danger. We need more Yaels in the world, and more reads from Green.