Just in time for Holocaust Remembrance Day, an author interview with Meryl Ain 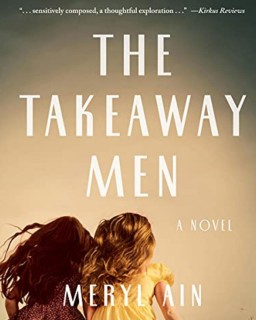 BIO: Meryl Ain is a writer, author, and career educator. The Takeaway Men, her award-winning Post-Holocaust debut novel, was published in 2020. In 2021, she founded the Facebook group, Jews Love To Read! Her new podcast, People Of the Book, airs on Authors on the Air Global Radio Network beginning in February. A member of The International Advisory Board for Holocaust Survivor Day, Meryl is a former history teacher and school administrator, with degrees from Queens College, Columbia University, and a doctorate in education from Hofstra University. She and her husband, Stewart, a journalist, live on Long Island. They have three married sons and six grandchildren.  Welcome, Meryl!

My feeling is that being Jewish begins with acknowledging that you are.

Today I'm excited to have Meryl Ain on gilagreenwrites. Meryl's novel The Takeaway Men centers around the Lubinski family, who are Holocaust survivors, and their twin daughters. Among other themes it explores assimilation into a new country and the aftermath of the Holocaust.

GG: What is your response to those who say we should not fictionalize Holocaust stories? One argument is that fictionalizing stories makes them less uncomfortable and less painful for people to read; the real ones are too painful for many. (

MA: As more survivors pass away each day, there is an increasingly greater obligation to tell the truth about the Holocaust. Fiction makes this painful topic more accessible and also humanizes the victims and perpetrators in a way that reading a history book may not. However, the caveat is that the fiction must be based on meticulous research to ensure that what is being written is true. The Holocaust novelist has a huge responsibility to tell the truth and not make things up. Although it was a big bestseller, Heather Morris received a lot of criticism for inaccuracy in her bestselling novel, The Tatooist of Auschwitz. Part of the reason is because she claims it's a true story. But she also experienced a barrage of criticism about the lack of veracity in her descriptions of Auschwitz. Similarly, the Amazon Prime series, The Hunters, had many errors although it claimed to be inspired by true events. The danger of presenting fiction based on inaccuracies is that a pretend picture of the horrors of the Holocaust may be accepted as authoritative.The truth is ghastly enough without having to make things up. Similarly, writers want to be careful not to provide ammunition to Holocaust deniers and anti-Semites.

GG: In your interview in the Jewish News of Northern California you say: "What is truth, and what is the impact of secrets and lies," Ain said. Do you think today we live in a time where people are still interested in the truth or do we live in a time with competing narratives and the narrative with the best marketing and PR wins?

MA: I sincerely hope that people are interested in the truth, but we definitely live in an age where we tend to be drawn to sites that reinforce our own opinions. And, of course, this is an era of increasing "spin." That's why it's more important than ever to teach and inculcate critical thinking skills in young people. And we all should force ourselves to become familiar with different narratives of events. The advice to "think for yourself" is more relevant than ever.

GG: Are you working on a new novel now? If so, please tell us about it. If not, what are you busy with these days?

MA: Yes, thanks for asking. I'm working on a sequel to The Takeaway Men. I received many questions from readers who wanted to know what happened to the twins and the other characters, as they got older. So, while I did not think of a sequel when I was writing the first book, readers convinced me that I had to write one. My first novel ends in 1962 when the twins are teenagers. The sequel will follow them from the assassination of President Kennedy in 1963 through the turbulent '60s and beyond. I'm excited to tell this story against the backdrop of a society that is changing in many ways, including the role of women. The book will be published in April 2023.

MA: A majority of bestselling novels on Amazon are Holocaust-related, so there is still a thirst for this topic. As I indicated, as long as there is meticulous research and the background information is accurate, we all need to keep the focus on this horrific period in human history. Writing about the Holocaust in an age of anti-Semitism is more of a responsibility than ever. We can never forget that too many stood idly by as progressive steps were taken that resulted in the Final Solution. As we continue to lose survivors, there will soon be no one who remembers first-hand. It's the responsibility of teachers, parents, and writers to present the Holocaust to young people in a way that they can relate to it. That's where the value of fiction comes in and the way a novel fosters inquiry.

These are the questions I wanted to raise in The Takeaway Men: How did this happen? What is our responsibility to our fellow human beings? What do we do when we see evil in the world? Do we speak, take action, join in, or look away? How do we treat those who are different, including immigrants?

I'm pleased that educators have recommended The Takeaway Men as a teaching tool.

GG: There's a lot online about your novel discussing identity. Do you think there's such a thing as a Jewish identity? Could you elaborate on that?

MA: One of the questions I wanted to raise in The Takeaway Men was: Who is a Jew? I had some very interesting conversations with readers in the more than seventy- five zoom programs I did throughout the world. I'm going to continue exploring that theme in the sequel. My feeling is that being Jewish begins with acknowledging that you are.

GG: Was there a reaction to your novel that surprised you?

MA: First, some readers could not understand why Aron, such a pious man, did not have his wife convert to Judaism, but pretended that she was Jewish. They asked how an observant Jew could raise two daughters who were not technically Jewish. This triggered meaningful dialogue of the question, Who is a Jew?

In addition, I was surprised and pleased that the book appealed to non-Jews as well as Jews. They found meaning in the immigrants' story and in the Righteous Gentile narrative.

GG: What do you do when you're not writing or reading?

MA: Last year, I founded the Facebook group, Jews Love To Read! I'm so delighted that we currently have more than 1,800 members –authors, readers, bloggers and reviewers from around the world– who share their love of books with Jewish content. I'm also excited that I will be starting a podcast, People of the Book, in 2022. I will be chatting with Jewish authors and others on Authors on the Air Global Radio Network.