White Zion Spotlight: What Is That Book About 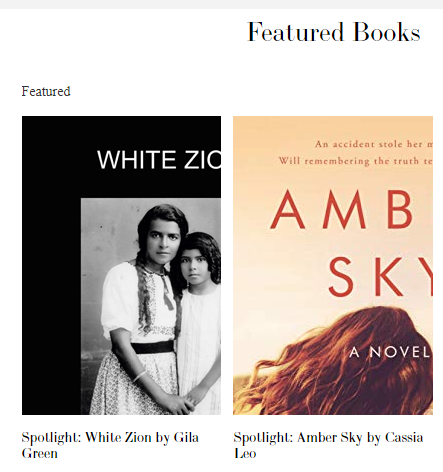 Thank you so much to Michelle Bowles and her inspiring book blog "What Is That Book About" for spotlighting White Zion. I really appreciate what she writes on her site: "Now, for me, it isn't about the most popular book or one "that" is on that list. Books mean a lot to me and the people who take the time to write them. The books you will see on here are selected based upon the heart of its contents not popularity. It means more to me to share a great story with you rather than one that has sold a million copies." It means a lot to me as an author to read this.

Here's an excerpt I included in the spotlight from The End of Jewish Jerusalem, one of my all-time favorite short stories.

All three of them jumped at father's customary bark. Father wears the clothing of his socialist political party, Mapai. Loyal Mapainiks wear khaki from head to toe, Shabbat and weekdays. He always adds his dusty gray hat to this uniform, never a kippah. Assaf thought he had gone to work.

"Do you know what happened to me today?" Father growls. "I was expecting my promotion. Went in early. That promotion was for me. In my hand."

Three sets of eyes stare down at the cold stone floor. Even at seven, Adi knows better than to look up. His cereal-covered spoon hangs between his fingers. Now the dysa will be cold.

"Do you know what they did? The mamzerim! Do you know what they did? They brought in this Russian Jew, some Ashkenazi from Russia. He doesn't know the first thing. The first thing he does not know. They gave him the position and then they asked me, me who has been working, no, slaving for a decade and a half for them, an honest to God slave I have been, they asked me to teach him the ropes. Can you believe that?"

So gratifying when a flash participant gets publis...
My young adult novel No Entry was part of Vancouve...