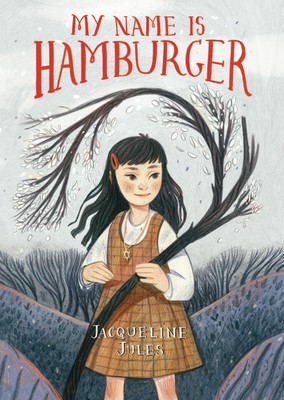 "I would encourage a Jewish young person to express their Jewish identity in any way that feels comfortable to them."

Jacqueline Jules is the author of over fifty books for young readers including the Zapato Power series, the Sofia Martinez series, The Porridge-Pot Goblin, My Name is Hamburger, Never Say a Mean Word Again, and Tag Your Dreams: Poems of Play and Persistence. Please visit her online at www.jacquelinejules.com

GG: Your story is written in verse. Did you use mentor texts to do this? If so, which ones and why? If not, why not? Do you simply not need them?

I think the first verse novel I read was Out of the Dust by Karen Hesse in 2009. It blew me away. Since then I've read and been moved by many poignant novels in verse. I can't say I've used any one particular verse novel as a mentor text because I feel very comfortable writing in verse. Before I began writing fiction, I wrote poetry. I am the author of three poetry chapbooks and one full length collection for adults as well as a poetry collection for young readers, Tag Your Dreams: Poems of Play and Persistence. My poetry has been published in well over a hundred journals and anthologies. My Name is Hamburger was many years in the making. My first drafts of the novel were in prose. It wasn't until I began writing the story in verse that the narrative rose to the emotional arc I wanted.

GG: Do you think much has changed for Jewish children since your own childhood? We read about anti Semitism on campuses and young Jews hiding their identities at school even today. Could you comment on that? Would you be comfortable telling a child to wear a noticeable Star of David at a public or mixed school today?

That is a very interesting question. Would I encourage a child today to wear a noticeable Star of David? I think where the child lives should be considered. In some parts of the United States, Jews are a tiny minority. Wearing a Jewish star necklace could put a person in a position of constantly explaining their religion to others. This was my experience growing up. I was a token Jew in most of my social interactions and often called upon to discuss my religion. However, this wasn't because I wore a Jewish star. Where I grew up, people were well aware of who was not Christian. A Jewish child in a community where church membership is socially important doesn't have to wear a Jewish item to be singled out. So it all depends on the young person. My son wore a kippah in high school. While he was not the only Jew in his school, he was definitely not a majority. He felt it was important to his personal identity and so he did it. I would encourage a Jewish young person to express their Jewish identity in any way that feels comfortable to them.

GG: You mention your father was German-speaking. Did this cause a conflict when you were growing up that comes out in your writing? On one hand, Jews were the victims, on the other hand, Germans were seen as the aggressors. Did this cause you or your family to be seen as both at times?

My father's native tongue was German but as a Jew, he was never considered to be an aggressor. His heavy accent caused conflict when people in our small Virginia town didn't understand his English pronunciations. A section in My Name is Hamburger recalls this:

No pauses or puzzled looks—like when Daddy speaks

Like many German-speaking people, my father never learned to pronounce "th" in English.And his "w" sounded like "v." In another section of My Name is Hamburger, a bully mimics the father of the main character, Trudie, by repeating, "Vy! Vy! Vy!" Trudie's internal response is as follows:

Why does Daddy's voice,

so dear to my ears at home, sound

As a child of an immigrant, I only noticed my father's accent when I realized that other people did. Sometimes it made me uncomfortable.

GG: What do you say about those who comment that Jewish writing is always anti-Semitism in some form? Do you think there can be too many "Jews as victims" stories and not enough Jews as celebrated stories? Is this relevant to you when you decide what to write?

While Trudie in My Name is Hamburger encounters anti-Semitism during the story, she is very attached to her identity as a Jew. Trudie loves Shabbat dinner on Friday nights with her family, describing it as a time when her "family feels braided like the challah bread Momma baked in the morning." Trudie is frustrated because her best friend, Lila, doesn't understand why her family drives thirty miles to attend a synagogue rather than attending a church a few blocks away. Trudie describes her preference for synagogue services "where I feel most at home."

"At Beth Israel, something inside me

My lips move all on their own."

I think Jewish writing can acknowledge anti-Semitism as a part of the Jewish experience and still celebrate the joys of Jewish observance. My own encounters with anti-Semitism have deepened my connection to Judaism. Trudie in My Name is Hamburger moves beyond being "a victim" and embraces her heritage both as a Jew and as the child of an immigrant. She tells the bully in the final pages of the book, "My name is Hamburger. An all-American food."

GG: Do you think your experience and by extension the experience of your fictionalized character would have been different if the character was a boy? Is this book particularly a girl's experience?

That may be a hard question to answer because the character of Trudie is based on the Jewish girl I was growing up in a small Virginia town during the 1960s. While the story was inspired by my own life, I think the emotions Trudie experiences and the conclusions she reaches can connect with readers of all gender identities.

GG: Anything you wish to add? Please tell us what you are working on next?

I have two books coming out in the spring. Moses and the Runaway Lamb (Kar-Ben, May 2023) is a retelling of a midrash about Moses and why he was picked as the leader of the Jewish people. Freddie Ramos and the Beach Monster (Albert Whitman, April 2023) will be the thirteenth book in my Zapato Power series about a boy in an urban community with superpowered purple sneakers. Please visit my website at www.jacquelinejules.com

Repost: November Jewish Book Carnival is Up
The Beauty of Jewish Board Books By Nancy Churnin