Book Review: A Story of Jewish Experience in Mississippi 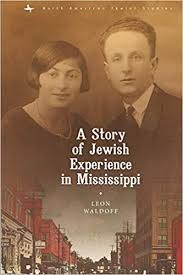 Title: A Story of Jewish Experience in Mississippi

Disclaimer: I was offered and accepted a free copy of this book courtesy of the publisher. I was not paid to write this review.

Excerpt: "It was the bombing of the synagogue in Jackson on the night of September 18, 1967, that would prove to be the most effective catalyst and begin to make clear who would speak up and who would continue to remain silent…The explosion could be heard half a mile away. Although no one was in the building and the damage to it was limited, the Jewish community suffered a severe shock."

Summary: Leon Waldoff is determined to pry open the door to his parents' past through his exploration of their journey to America as Russian immigrants in the 1920s. In his book, A Story of Jewish Experience in Mississippi, he paints a vivid picture of America in the twentieth century and he takes the reader along for the ride, migrating from Belaya Tserkov, a small city southwest of Kiev, to Ellis Island, and Hattiesburg, Mississippi. In doing so, he finds himself entangled in the experience of the Jewish community far beyond his own family, as well as the struggle for social justice in the 1950s and 60s in a time of often violent resistance to the segregation between blacks and whites. In this way, he makes his story matter to a far larger audience.

Review: For regular readers of accounts of Jewish immigration to the US prior to the Holocaust, this book begins in classic style. It is not uncommon for Jews to have left large families behind, to have been the only ones from their families to make it to America, to have siblings scattered in other countries, to choose to immigrate rather than serve in the Russian army, to have suffered a family history of pogroms, or to struggle with medical conditions (in this case a mother who suffers from psoriasis).

Waldoff writes with authority and offers a broad view of Jews from this lost era. The dramatic cover is beautiful and I'm a fan of old photographs and a retro look. The book could have benefited from a more inspirational ending given that we are told the current congregation of thirty families is "stable" but "not growing."

We move through the Great Depression, the Second World War, and the Civil Rights Movement from a uniquely Jewish perspective. The most compelling part of this book is the retelling of the story of one outspoken rabbi who refuses to be silent about race in America, despite a growing number of threats, including one from the White Citizens Council that made it clear they "knew how to silence" unwanted voices.

Waldoff writes in economical prose and does a good job of using compelling dialogue throughout the book to make it come alive. This book offers valuable information for anyone seeking a detailed account of Jewish life in southeast Mississippi to the present day. It will come as a surprise to no one familiar with Jewish history that Jews were just as torn in the past as they often are in the present when it comes to the balancing act between speaking up for what is right and the real fears of boycotts, financial ruin, and violence. It is uplifting to read that the vast majority of Jews rallied behind the path to freedom for blacks and whites in America—though not surprising.