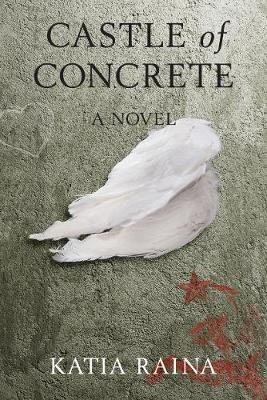 Note: I was delighted to receive a free copy of this novel in the mail from the author.

I'm a fan of historical fiction, so I was delighted to receive a copy of author Katia Raina's debut novel Castle of Concrete. I enjoy an introduction to new authors and it so happens I'm working on another project that has to do with the Soviet Union, so this was timely. If you're a fan of historical fiction and romance, this book is a good choice.

From the book cover:

Set in the final year of Soviet Russia's collapse, this stunning debut novel tells the story of Sonya, a timid Jewish girl reuniting with her once-dissident mother and falling in love with a mysterious boy who may be an anti-Semite. All the while, Sonya's mama is falling in love also⎯with shiny America, a land where differences seem to be celebrated. The place sounds amazing, but so far away. Will Sonya ever find her way there?

I would recommend this novel for anyone interested in the fall of the Soviet Union, particularly in the early 1990's who likes teen romance thrown in. You will learn many intriguing details. Raina provides an authentic Russian, teen, female point of view that is captivating and worth reading and a refreshing change from a lot of what is available in the young adult category. Her voice is original and offers a glimpse into a non-Western way of thinking, which is both educational and entertaining. Raina's heroine, Sonya, is fifteen and caught in a love triangle. On one hand, she's fascinated by a non-Jewish Russian boy and on the other, she cannot stop thinking about a Jewish boy, who is a Zionist and interested in Judaism from the get-go. All three of them attend the same school and much of the story takes place between and during classes. The love triangle reflects the  biological split in the heroine who was abandoned by her Jewish mother as a young girl and has a Russian, non-Jewish father.  I also enjoyed Sonya's connection with her maternal grandmother.

Various parts of this novel confused me. I was not always sure who was speaking and where we were located. It was not clear to me why Sonya was so intensely attracted to Ruslan (the non-Jewish boy) in the first place--I should have been absolutely convinced as this is a foundation of the book. Although, it is true that it's common for teens to be intensely ruled by their passions, Ruslan did not do anything to deserve such instant devotion on her part. She opens up to him about every aspect of her personal life very early on in the book, which I found jarring given that she's the new girl in school, confused about her heritage, doesn't yet have friends, in a new city, and so on.  This lack of hesitation didn't work for me as well as it might have if it were done more gradually. Teens are terrified of embarrassment and humiliation and there was no reason I could find to trust Ruslan right off the bat. Her attraction to Misha seemed far more natural and logical.

I would welcome a second novel by this author.

Double Feature in Sephardic Horizons Summer 2019 i...
Thanks for the five out of five