"The job of the fiction writer, as I see it, is to get inside someone else's skin." 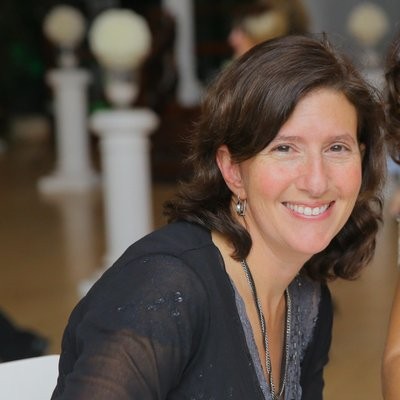 Julie Zuckerman's fiction and nonfiction have appeared in a variety of publications, including The SFWP Quarterly, The MacGuffin, Salt Hill, Sixfold, Crab Orchard Review, Ellipsis, The Coil, and others. THE BOOK OF JEREMIAH, her debut novel-in-stories, was the runner-up in the 2018 Press 53 Award for Short Fiction and was published in May 2019. A native of Connecticut, she resides in Modiin, Israel, with her husband and four children. Learn more at her website or follow her on Facebook or Twitter.

One of the things I'm asked most frequently about my book (The Book of Jeremiah, Press 53, 2019) is my choice of a male protagonist. "Was it difficult to write from a man's point of view?" The simple answer is no. I was a bit nervous about the one (pretty tame) sex scene between Jeremiah and his wife, told from his point of view, but after workshopping the story in a class with a male instructor and hearing from him that I'd done an admirable job with it, I relaxed. The longer answer to the question of why I chose a male character is that as a fiction writer, I actively seek to step out of myself and my experience. I haven't had a very dramatic life – writing a character based on myself would make for a very boring story; it's exactly the challenge of thinking up new characters and imagining myself in their shoes that makes writing exciting.

My novel grew out of a writing prompt: "write about someone who is definitely not you, but give your character an interest – a hobby, a career, an obsession, etc. – about which you're curious. I wrote a story about an 82-year-old man, a semi-retired political science professor. Definitely not me, though I do have degrees in political science and international relations. In the story, "MixMaster," Jeremiah takes up baking to satisfy his sweet tooth (a hobby and a problem I do share). It's clear he loves his family very much, but his kids find him exasperating. He's crusty and cantankerous, but also somewhat charming. There's a lot of eye-rolling going on. Once I finished writing that story, I knew I wanted to write an entire book about Jeremiah, to unravel his personality through stories from different points in his life and from varying points of view. I'd hit upon a voice which fascinated me, and it mattered little that he was a man and I am a woman.

The job of the fiction writer, as I see it, is to get inside someone else's skin. I've written stories from the points of view of an African-American female landscape architect, a gay college student in the 1960s, a young Hungarian entrepreneur, the twin sister of a Breakfast Club character, a grieving widow, a little boy obsessed with baseball, and an older woman who joins a march that literally topples the patriarchy – none of which I've ever experienced myself (though the last one certainly holds some appeal).

A few years ago, I wrote a draft of a novel. Though the main character lives in Israel, as I do, I tried to make her "definitely not" me. I made her a convert (I'm not), given her an Israeli husband (mine is American), a different profession (she's a psychologist, I work in high tech), and have her living on a moshav (I live in a city). I've since come to realize – belatedly, as I'm struggling through the revisions on the second draft – that there are still too many similarities: she's an American immigrant, around my age, with teenage children, and similar interests and political sensibilities. Much as I dread the task, if I'd like to bring this novel to full fruition, I will have to rework her character and make her really "not me" in more significant ways. It's a humbling experience, let me tell you, when your writing group talks about a character as not being particularly likeable, and – because there's not enough distance between the character's personality and your own – it feels like a critique of your entire being.

When Toni Morrison passed away a few months ago, my Twitter and Facebook feeds were awash with her beautiful advice and quotations, interviews with her and essays extolling how her words gave other writers "permission" to write on their terms. For African-American writers, she spoke about freeing themselves from the white gaze. For Rachel Kadish, who studied with Morrison at Princeton, it was the permission to tell the stories of the Holocaust refugees among whom Kadish grew up, though she herself was not a survivor. As she explains in a recent essay in The Forward:

I proceeded to stammer something about how I wasn't sure I had any right to tell a story about my family's world — because, after all, I hadn't been there. My relatives were the survivors. I'd survived nothing.

"Who," [Morrison] countered, "gives out the right to tell a story?" She pressed on: I could wait around my whole life for someone to give me permission to write something related to my family's history. Or I could simply give myself permission.

If you have an hour, I highly recommend watching this fantastic video of a 2013 interview between Toni Morrison and Junot Diaz through the New York Public Library. Towards the end, she shares the first piece of wisdom she would give her students at the beginning of a creative writing class.

"I know you've heard all your life, 'write what you know,' well, I'm here to tell you: You don't know nothing! Do not write what you know! Write about a young Mexican woman working in a restaurant who can't speak English, or about a famous mistress in Paris who's down on her luck. [When they take this advice], they really do well. They write way out of the box. Once you open that door and say, 'I don't want to hear about your grandmother. Forget that. Let's go somewhere else.'

I loved hearing her say that. I cannot presume what Toni Morrison would have said about cultural appropriation, the subject of much debate in the creative arts world.

To date, no one has told me I had no right to write from a male point of view, but I wonder what the reaction would be if I'd written a book where the main character comes from a different cultural background than myself, or whose race / religion / sexual orientation / socioeconomic status differs from my own. I recognize the difference – though we don't share a gender, my character obviously comes from a similar cultural background – so perhaps the questions are not as fraught.

I ask myself how I would feel reading a Holocaust novel written by a non-Jewish author, and my conclusion is that if the characters and narrative feel authentic, the author's religion or background do not matter to me. Case-in-point: one of the most searing, powerful Holocaust novels I read in recent years was written by an author with a name that is not obviously Jewish, and I could find no reference to her background. But whether my next book or story will feature an Israeli nurse or a French priest or a Mexican waitress, I will be striving, as Morrison counseled her students, to go somewhere else.