Coming up: A conversation with author Ayelet Tsabari 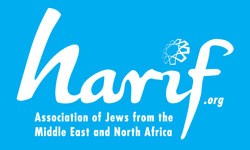 I am so pleased to have been invited by Harif  to speak with talented author Ayelet Tsabari, (The Art of Leaving). I am a fan of Ayelet's work and honored to be in conversation with her to kick off 2021.

Our talk will be moderated by author Lyn Julius, co-founder of Harif, the UK Association of Jews from the Middle East and North Africa. Lyn is also the author of 'UPROOTED: How 3,000 Years of Jewish civilisation in the Arab World. She kindly reviewed my novel-in-stories White Zion (Cervena Barva Press, 2019).

We will be discussing women authors with Yemenite roots. In this case, we both have Canadian connections, as well. I am from Ottawa, Canada originally and Ayelet lived in Canada for many years.

From their website: HARIF is a UK charity representing Jews from North Africa and the Middle East (UK no.1186454), and dedicated to promoting their history, culture and heritage. Few know that ancient Jewish communities, predating Islam by a millennium, produced the Babylonian Talmud, great rabbis, doctors, thinkers and poets. In modern times, Jews made important economic and cultural contributions to their home countries. Few in the West are aware that Jews were an integral part of the Middle East and North Africa before they were were driven out of their homes in the second half of the 20th century.

Over 2,000 years of history in the Middle East and North Africa came to an abrupt and tragic end just 50 years ago. Jews departed for Israel and the West, leaving an enormous cultural and economic void behind. In another 20 years, few Jews who were born in these countries will still be alive. A vital chapter of Jewish identity, history and culture – an entire civilisation – will be lost. HARIF is here to make sure it is not forgotten.

I will send the link closer to the time.

LISTEN: "Bad guys in General": eco-fiction No Entr...
Only five weeks away: My new Autofiction Workshop ...