Fiction can be full of ideas and can tackle important issues, but I now understand that it's usually not interesting when the writer has predetermined the points he or she wants to impart. 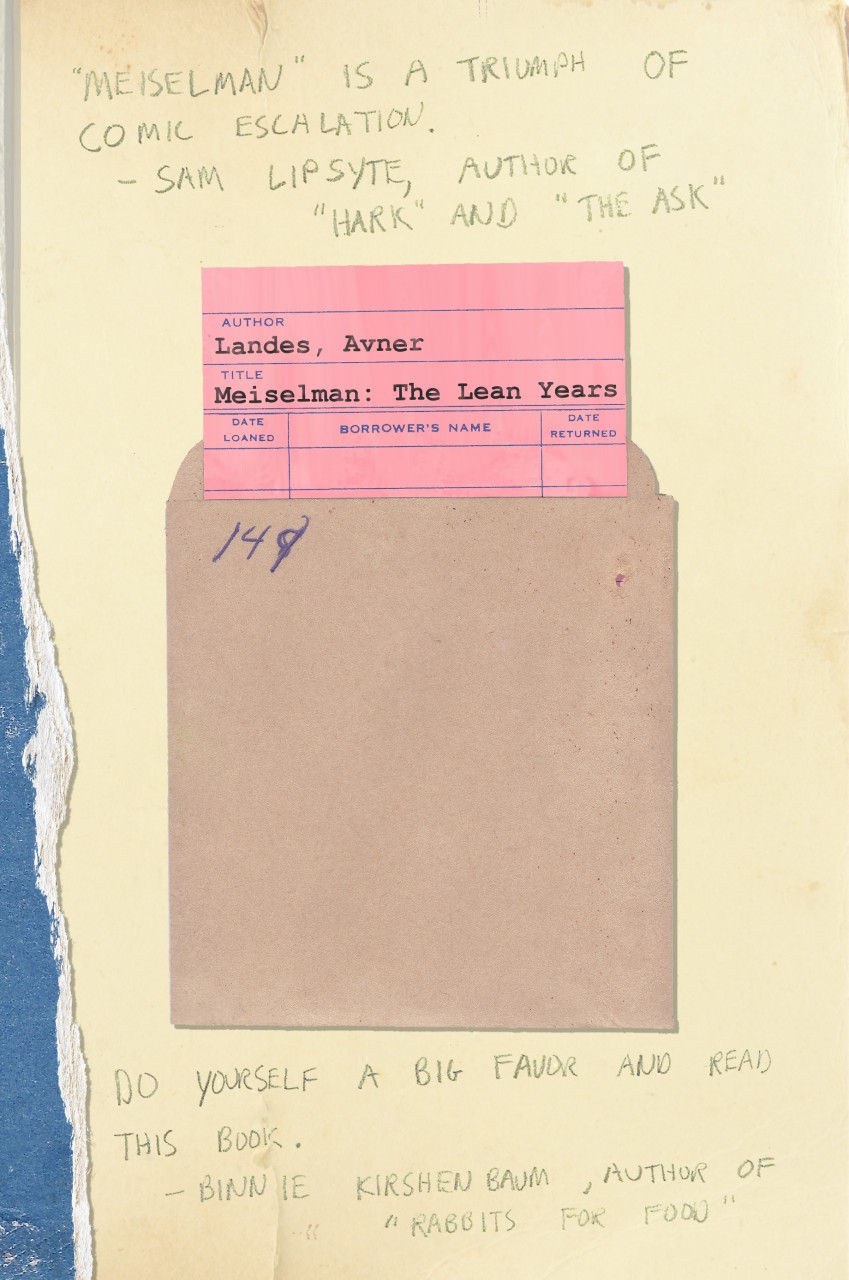 I'm excited to have author Avner Landes visit gilagreenwrites today. Way back (in another life), I met Avner at Bar Ilan University while I was studying for my MA in Creative Writing. It was wonderful to reconnect in my search for authors to interview for this website. Thanks so much, Avner, for responding. I'm particularly interested in sharing this with you because Avner has done what so many of us are told not to do according to the "rules:"  In other words, Avner wrote and published a long novel.

BIO: Avner Landes earned an M.F.A. from Columbia University. Meiselman: The Lean Years, (Tortoise Books) is his debut novel. He lives near Tel Aviv with his wife and two children, where he works as a ghostwriter and is at work on a novel.

GG: Could you tell us something about the process of writing "Meiselman: The Lean Years?" How long did it take you to write it?

Eleven years from the time I started writing the book until it was published, but I wasn't working on the book the entire time. The first draft took around six years to write. I'm a slow writer, clearly, but I also think I was learning how to write a novel. Once I finished that first draft, which came in at around 160,000-words, the work became about trimming the fat and finding the right shape for the book. I had such a hard time cutting. It's easy to fall in love with scenes and plot lines. You hold out as long as possible, until you finally realize there's no choice in the matter.

GG: You have a lot of reviews that mention this novel is funny. Did you set out to write a humorous work? What is the message of your book?

With the first draft, there's not much intention when I'm putting something down on the page. During the editing, the stage where I read what I've written, I'm focused on understanding the movement of the scene. Where does the scene start, where does it end, and how do we get there. And it's usually conflict that drives this movement. Conflict with another person, conflict with the world, conflict with one's own beliefs. But all conflicts, at their core, are absurd. Conflict happens because we exaggerate our own importance and the importance of our actions and thoughts. Yet we don't experience them that way. To us, they are deadly serious. Not to mention that many conflicts have a tragic component to them. So I want the reader to see the absurdity of the conflict, but also appreciate that it's of great consequence to the characters. Without the latter component, the scene ends up being nothing more than something akin to slapstick. I never want to suggest how a reader should react to a scene. Is this book funny? I think so. But I also think it's incredibly sad.

GG: Is there something edited out of the book that you originally wanted to be there?

This is a good question. By the end of the editing process, as you know, it's sometimes hard to remember if certain sections are still in the book. There were lines, paragraphs, and even a full scene, that were in the book for ten and a half years and then deleted three days before the book went off to the printer. But no regrets. Decisions were made, and they were the correct ones, at the time. We tend to overwrite with our early drafts. This helps us learn about our characters, the setting. It helps us find our voice and discover interesting plot lines. Editing is about getting rid of the material that serves the process of writing the story but is of no use to the story itself.

GG: Have you had any unusual reactions to the work and what are you working on now?

Not everyone has to like the book, I tell my mother. There are plenty of celebrated books that I don't love, and most of my favorite books are ones that haven't found the readership they deserve. There was a reviewer—you can Google it with ease—who wrote a scathing review in a newspaper and then posted a video review to YouTube in case people didn't grasp from the written word how much he hated my book. But three months later, when trashing a different book, he brought up his hatred for my book yet again, which makes me think that the book actually struck a chord with him. Not that he liked it, but that it made him feel something he wasn't ready to feel. In truth, I anticipated the negative reviews bothering me more than they actually did. Sure, you want everyone to like it, but the positive responses and the gratitude you feel for anyone even taking the time to read it more than make up for any negative responses.

GG: Were you discouraged from publishing a 416-page novel? Were you worried that might turn off modern readers?

There were many agents who told me that they wouldn't take on a book this long because it would be too difficult to sell to a publisher. (I should add that they made this comment when the book was closer to 550-pages. And yes, at that length, it was too long!) But I felt early on that this needed to be a long book. I wanted to overwhelm the reader with Meiselman's obsessive thoughts as he goes through his day. I wanted time to move slowly in the book, for interactions to feel like they were dragging on. I wasn't worried about turning off readers because when I'm thinking clearly, I don't care about any other reader but me. I write what I want to read, and I like books of all shapes and sizes. Also, I wonder how true this is that readers won't read long books. In every genre there are countless examples of long books that sell.

Shenkenberg, a character in the novel, is a writer who will be coming to speak at the library where Meiselman works as the Events and Programs Coordinator. Originally, the novel contained some of his writing, which was an actual unpublished story I'd written close to twenty years ago about a man in his late twenties who travels with a group of senior citizens to Poland on a Jewish heritage trip. The humor of that story, and this goes back to your first question, was cheap, maybe a little hacky. (The narrator gets drunk at the hotel bar every night, so he is too hung-over to join the group on its touring during the day.) At the time, I thought it was funny. Readers—more accurately, fellow workshop participants and teachers—thought it was funny, too. Everyone could laugh along with the narrator scratching at his hemorrhoids in the crematorium of a concentration camp. But this type of humorous writing came to displease and bore me. Eventually, I realized that, though irreverent, the story was nothing more than an unoriginal cultural commentary on the "Holocaust industry." Everyone has heard the argument my story was making. It was low-hanging fruit. The writing and humor served a message that I'd formulated in my mind even before the story was written. Fiction can be full of ideas and can tackle important issues, but I now understand that it's usually not interesting when the writer has predetermined the points he or she wants to impart. I now understand that the truly fun part of writing is not knowing what will come out of you and end up on the page, the memories and beliefs you are not in touch with on a daily basis, or, to put it differently, that which you have been repressing for years.

Thanks so much, Avner. Please come back and visit gilagreenwrites again.