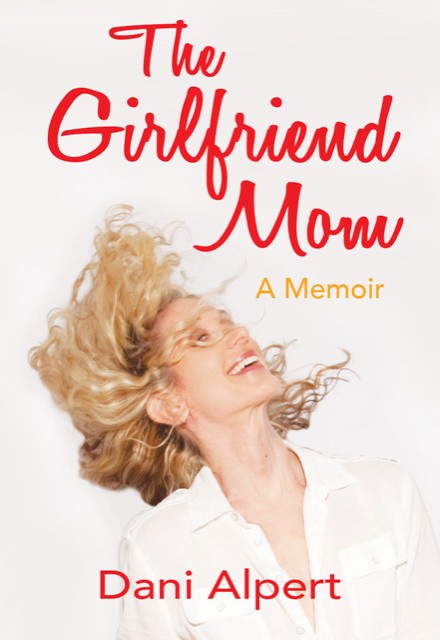 "There wasn't ever a time that I didn't want a career in showbusiness. I spent years wearing blinders, forbidding myself from thinking outside of the box."

I'm excited to share with you my interview with Dani Alpert, an author and Pilates enthusiast, who is new to me and who I've only met virtually. I'm so pleased she reached out to share her story that I feel is particularly relevant today as we expand our definition of family, including what is a mother and what is motherhood (and Judaism has a lot to offer on this topic.) I also happen to be a big Pilates fan and really relate to the combination. Please welcome, Dani Alpert! ​

Bio: Dani Alpert's first headshot was her mugshot taken after getting arrested for tagging in the New York suburban town where she grew up. She's been trying to reclaim those glory days ever since. After attending NYU Film School and the American Film Institute, Dani spent 25 plus years working as a screenwriter, stage performer, producer, and director. Her Lifetime Television film parody "A Really Intimate Portrait . . . of a Complete Unknown" was a festival breakout, lauded by both critics and audiences. Her writing has appeared in publications including Medium, theWoolfer, HuffPost, Babble, Pilates Style Magazine, Stepmom Magazine, and the Hollywood Journal. She's spoken at lifestyle conferences and been interviewed on nationally syndicated radio shows. Her memoir, "The Girlfriend Mom," is available everywhere May 5, 2020.

GG: Why did you decide to turn your experience into a memoir (as opposed to a novel or more fictionalized version of this story)?

DA: I turned my experiences into a memoir because I'm not creative enough to write a fictionalized version. I thought a memoir would be a way to make sense of what had happened in my relationships. I thought it would be healing and cathartic. It was certainly cheaper than therapy. I never entertained turning it into a novel because the truth was all I had. It wasn't a problem putting it out there for all to see — or read as it were.

GG: Did you debate about other forms? Had you published a short piece about this story before?

DA: The memoir started out as a book proposal, and I got a literary agent, but when she was unable to sell it to a publisher, she gave me my pink slip and sent me away. I decided to write it because I'd already done so much work writing the proposal, and I wanted to take back the control. I blogged about the story in drips and drabs on my website over the years, and I thought the story warranted a full-on hashed out, fleshed out multidimensional narrative.

GG: Was there something edited out of the book that you wanted to include?

DA: Not that I can think of. There were some stories that I left out because they belong in another book. I found it an easier writing process once I learned how to take a giant step away from my ego and not look at my words as precious material. It was always about the humor and the candor. Can it be funnier and am I hiding anything?

GG: Have you had any unusual / unexpected reactions to the memoir?

DA: None yet, but there's always tomorrow.

GG: Judaism has a long tradition of the centrality of motherhood: Judaism is passed through the maternal line, Sara had a child at an old age and famously laughed at her pregnancy, Rivka and Leah fought over Rivka's seemingly inability to have children, and on and on. Do you think Judaism has influenced your views on motherhood? If so, how?

DA: Growing up, I was aware that Judaism is passed through the maternal line, and about Sara and Leah but it didn't influence my views on motherhood, nor did I ever connect the two. As I say in the book, not wanting to be a mother "just was." It was biological, without any religious underpinnings, or social norms. I am proud of the fact that I passed down many of my cultural traditions to Nicole (my Girlfriend Mom daughter) even though I didn't birth her. She makes a mean Matzo Ball soup — I do not.

GG: Are you more passionate about Pilates or writing? How does one passion influence the other? Why do you think it took you so long to find your passion for Pilates?

DA: I'm equally passionate about Pilates and writing. It's the perfect balance of body and mind. Movement has always been an integral part my creative life. I don't think that I could (or want to) do one without the other. Writing can be profoundly lonely and heady, and I need Pilates, or any physical fitness, to take me away from my monkey brain.

There wasn't ever a time that I didn't want a career in showbusiness. I spent years wearing blinders, forbidding myself from thinking outside of the box. Decades later, when I left entertainment, I was free to explore other interests, or more accurately, interests that I'd suppressed or turned my back on.

GG: Are you working on another book?

DA: I have two book ideas that I'm tossing around — both memoirs, because, again, I don't have a good imagination.

DA: In our current climate, I find it best (for me) not to make plans. I take it one day at a time. I write, make things, promote my book, and work my body — other than that, it's all up for grabs.

DA: Fogo Island Inn is one of the most spectacular places that I've ever been to. AND, depending on what happens in November, I may need some suggestions on Shabbat services in Ottawa.

GG: Well, I'd be happy to help you out with anything Ottawa-related and indeed, I just returned from the Vancouver Jewish Book Festival and I'm up on the latest there, too. I'm sure many readers will be interested in your unique take on motherhood.