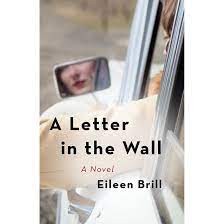 Today on gilagreenwrites, I wish to welcome debut author Eileen Brill. Brill's just released novel has a fascinating origin, an actual letter in the wall that she found in her own home. So many times I have been inspired to write a story about real life events that never came to fruition, so cheers to Eileen who followed up on an amazing inspiration and made it into something real and tangible that can now be shared with the world. Please welcome Eileen Brill!

"Soon after finding the letter and learning Joan was murdered, I needed to make sense of why she made the decisions she made and to try imagine who she was beyond what public records could reveal."

GG: In real life, your heroine Joan was murdered in 1971 in Oklahoma City, days after she went missing, a case which remains unsolved.

EB: It is definitely something I've considered. In researching the real Joan, I collected transcripts from the arraignment, preliminary hearings and pre-trial proceedings for the primary suspect (whom the district attorney asserted was hired to kill Joan). I was unable to obtain transcripts from the murder trial as they were the property of the court reporter, who had long since died. But there are details in the documents I have, as well as old newspaper articles I'd read and conversations I had with a cold case investigator, to help shape a really compelling novel.

GG: "I was really aware that there were no Jewish characters in my book," Brill said. "My character wasn't interacting — Jews weren't part of her world."Joan was written by a Jewish author, however, and her story is intertwined with Jewish values Brill learned growing up.The whole slant of my story has a lot of empathy in it, which I think is also [in] my Jewish background, and caring about others, viewing others through that lens," Brill said."

Could you expand on this above quotation? How else does your Judaism influence your writing?

EB: The concept of learning, knowledge, asking questions, analyzing and seeking truth is deeply enmeshed in Judaism. At Passover seders, even children are encouraged to ask questions, speak up, challenge what is believed to be true. Soon after finding the letter and learning Joan was murdered, I needed to make sense of why she made the decisions she made and to try imagine who she was beyond what public records could reveal. I had to put myself in her mindset in order to be able to answer questions on a deeper level.

GG: Do you think empathy is a uniquely Jewish trait?

EB: Empathy is most definitely not a uniquely Jewish trait, but it is a recurring theme in both traditional and modern Jewish education. Talmudic scholars reflect on empathy. The Passover story itself is one of slavery and liberation, commanding each generation to feel as though they were personally liberated from slavery. The secular Jewish haggadah my family read included many quotes from scholars such as Isaac Abravanel, who wrote "Let anyone who is hungry come and eat. Let anyone who is needy come and make Passover." So, While Judaism does not hold a monopoly on the idea of empathy, tzedakah -- fairness, justice, charity -- extends beyond giving money and material things. It's also about being charitable with our time, concern, and attention, withholding judgment, and putting ourselves in the shoes of another person.

GG: Your title "A Letter in the Wall" brings up images of the notes millions of Jews and others leave in the Western Wall. Was this deliberate?

It was definitely not deliberate. In fact, just after I signed with my publisher, someone at a party said she heard I had written a story called A Letter in the Wall and she wondered if it was about the Kotel. She happened to be Israeli. In that moment, I felt like perhaps I should change the title, wondering if it could be misleading. But, in the end, the whole inspiration for my story was the letter itself, so I wanted to highlight that and create a sense of mystery.

GG: The inspiration of this novel that began with this letter feels almost anachronistic in that letters are almost a thing of the past. Will anyone in the future find a letter in a wall or anywhere and base a novel on it? Hard to imagine people finding old text messages in old phones to inspire them. What do you think about this? Have you thought about it this way?

EB: I have thought about that, and the same can be said about photographs. I mean, does anyone print out photos from an iphone and put them into albums? What about videos? How will people of the future see recordings of family events? In fact, on my website, I wrote a blog about this very subject.

It's so true that letter-writing, at least the handwritten or typed variety sent via snailmail, is not what it used to be due to our current technology. We have so many other ways to communicate with friends and family, and I think that most people's attention spans don't lend themselves to sitting down and composing a well thought-out letter. Fortunately or unfortunately, out of convenience or necessity, most people don't seem to take time to compose entire letters to people in their lives. My mother and I were big-time letter writers with each other...and she only lived 20 minutes away! We used letters to express love and appreciation for each other or to relay funny stories or reminisce. These days, when I write a letter, it is either contained within the limited space of a greeting card or typed on my laptop, printed out, then never sent -- because I tend to write them more to work out my thoughts and feelings about someone rather than to actually communicate with that person!

GG: Could you tell us about the publishing process? Do you have advice for other future authors?

EB: Wow, where to begin? This part of writing a book was eye-opening for me, to say the least. I knew that there are many resources for self-publishing, but, for me, that was not an option. But, I had no idea what was involved in trying to find a publisher nor just how "competitive" the business of marketing a published book actually is. The process of "querying" -- of sending cover letters with manuscript excerpts to publishers -- was far more time-consuming than I'd realized. Authors, especially debut authors, can spend years sending out these letters, to no avail. After close to a year of getting rejections or no responses from publishers, I got an offer from Spark Press, an independent hybrid publisher. I had been working with a developmental editor who comes from a publishing background, and she said that Spark Press has a good reputation and is not a "vanity" press. I reached out to about 7 or 8 different authors who had published with them, and each person gave me a fair and positive assessment of the experience of working with Spark Press, so I moved forward. It is definitely a financial investment, one that many people either cannot do or are unwilling to do, which is understandable.

My advice to other novice authors is two-fold: 1 - Understand that launching a book is like opening a small business. You will be investing time and money, and it cannot succeed unless you put both of those things into it. And, remember, it's a marathon, not a sprint. And, 2 - Ask yourself why you want to publish a book. If the answer is to make a lot of money, to get on the NY Times Bestseller list, to have someone buy the film rights, to become famous, well, you will likely be disappointed. For me, I had a story to tell, and I couldn't not tell it. Plain and simple.

GG: What are your future writing plans? Anything you wish to tell us?

EB: I have an idea based on another true story, something I came across in an article I found while researching Joan's life. It's only in the conceptual stage right now :)