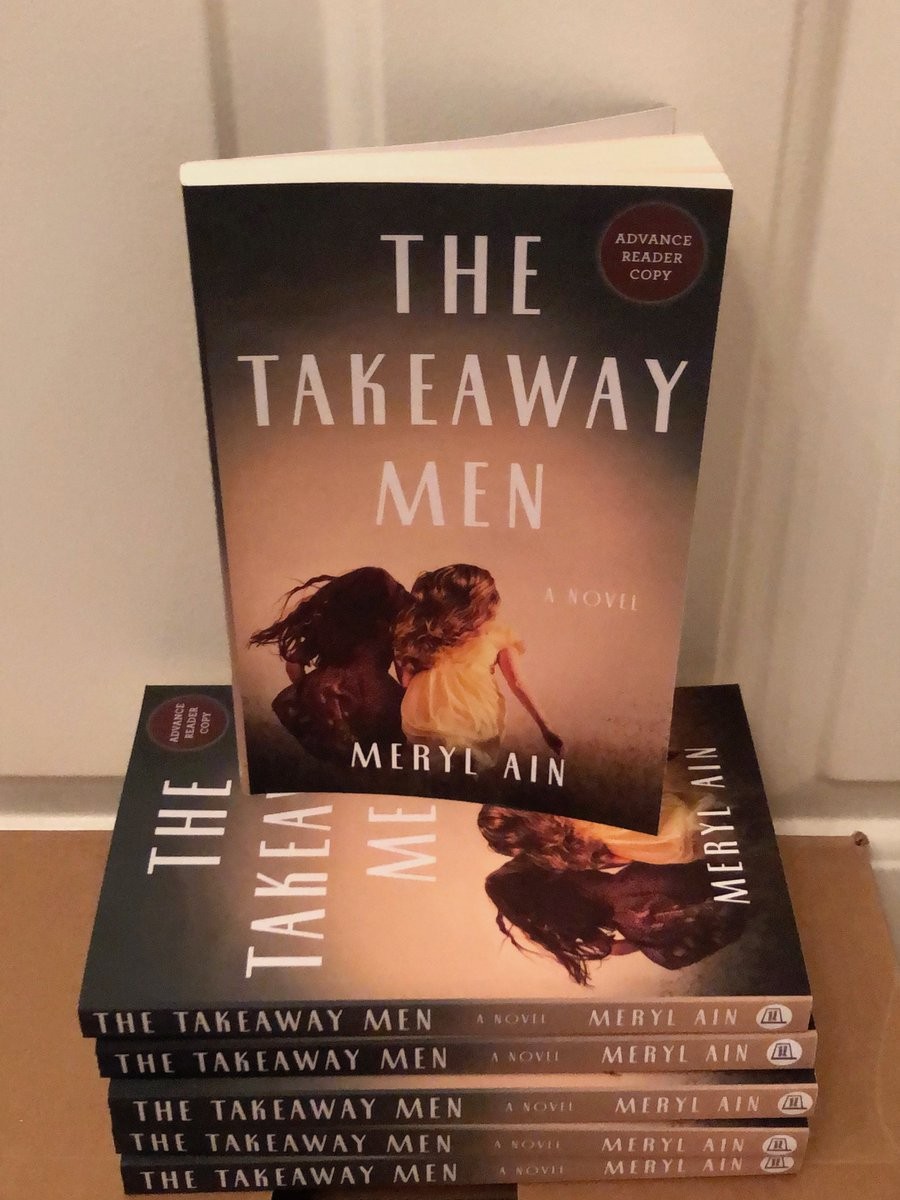 Please welcome author Meryl Ain to gilagreenwrites. Today Meryl discusses the title of her new novel and the layers of meaning she continues to discover behind it.

One of the most frequently recurring questions I'm asked about my debut novel is: "What is the meaning of the title, The Takeaway Men, and why did you choose it?"

No, it's not a book about men who deliver takeout food, but rather a post Holocaust story about twin sisters Bronka and Johanna Lubinski, who arrive in New York with their parents from a Displaced Persons Camp after World War II. As they grow, in addition to adjusting to American culture in the '50s and '60s, they begin to wonder about the cloud of secrecy and sorrow that hangs over their parents. As they try to investigate and demand answers, they realize that their parents' memories will be difficult and painful to uncover. The Takeaway Men explores the impact, not only of the Holocaust, but also of immigration, Jewish identity, prejudice, secrets and lies on both parents and children.

Although my parents were not Holocaust survivors, the subject of the Shoah has stirred me ever since I read The Diary of Anne Frank in the sixth grade. As a youngster, I remember being disappointed that the book ended before Anne and her family were deported. I wanted to know what happened to the girl with whom I strongly identified after her diary ended. As a child, I heard the word, "concentration camp," and wanted to know what it meant and what happened to Anne. I remember being heartbroken when I learned that she died in the Bergen-Belsen concentration camp only a couple of months before liberation.

I yearned to know more and more about this horrific chapter in Jewish history. Later, as a teenager, a college student, a graduate student, a history teacher and researcher, I continued my obsession with this topic and read and watched everything that I could get my hands on about the Holocaust. I had written research papers and non-fiction essays about the Holocaust, but never fiction. A few years ago, I decided that a novel might be the best vehicle to channel my passion.

As I studied and read about the art of novel writing, I learned much. One tool was to remember your emotions in regard to a specific incident and channel them into your character. One of my earliest memories was when I was about four-years-old and an official-looking man in a suit with dark hair and black horn-rimmed glasses came to our door. I ran to the door before my parents and looked at this strange man, asking him: "Who are you?" With a straight face he said to me, "I'm the takeaway man; I've come to take you away."

I am a grandmother now, but I still remember the terror I felt. I screamed and ran into the bathroom where my father was shaving. Even though my mother told me that he was a supervisor who was coming to pick up our dry cleaning, I was not consoled. My mother immediately complained and cancelled the cleaning service, but I still remember the little red delivery van in our neighborhood with a picture of a man in a kilt. For years, I became short of breath and ran and hid whenever I saw that truck. The thought that someone would take me away from my home and family became a real and persistent fear.

Years later, my mother asked me: "Why did you believe him?" I had no answer, except that children do not understand sarcasm or nuance.

As my characters and plot began to take shape, I continued to research various scenarios and discuss these with family and friends. The first time I referred to "the takeaway men," I did not do so deliberately.

The initial mention is on page seven when Aron, the twins' father, is reading the weekly DP Camp newspaper, Undzer Hofenung (Our Hope), which features the accounts of survivors.

He silently reads about a woman named Miriam's arrival at the Plaszow forced labor camp when she and her sister, Marta, along with several thousand other residents of the Krakow ghetto were marched there in 1942.

"But in a few days, we were standing for roll call and the music was blaring. We saw from a distance an open truck with children. Marta was standing next to me with her twin girls who were five-years-old. The Gestapo was looking for more children. The girls screamed to Marta, "Mama, the takeaway men are coming, they're going to take us away!"

Later, when the Lubinskis' neighbor, Lenore Mandelstern, is arrested for conspiracy to obstruct justice in the Red Scare (the Julius and Ethel Rosenberg nuclear spy case), her four-year-old daughter, Mindy, calls the FBI agents "the takeaway men." She is clearly terrified and traumatized as she repeatedly says she hates them because they have taken her mother away for questioning.

Seeing Lenore being taken away evokes a visceral reaction in Aron, who complains to his rabbi: "We've only been here two days, and I see a young woman, the age of my wife, taken into custody by government officials, just like the Gestapo agents did in Kielce. Why? What did she do?"

Aron's terrified reaction unleashes in little Bronka her own anxiety and fear.

As described in the book: "Only four days off the boat, the toddler had become collateral damage, not only in the Mandelstern calamity, but also in the tragedy of her father's unknowable and unspeakable legacy. The tale of the takeaway men would be not only a searing and scarring memory, but a metaphor."

As I continued to develop the plot and characters, I saw that "The Takeaway Men" had to be the title for my novel. It was also shorthand for the millions of children that were separated from their parents – never to be reunited – by the Nazis. When children are torn from their parents, there are long-term repercussions. Finally, after I finished writing, it also struck me that this topic is as current as news stories describing the separation of children from their parents at the U.S./Mexico border. As we've seen with Holocaust victims, the trauma is transmitted to the next generation.

Meryl Ain's debut novel, The Takeaway Men, will be published by SparkPress on August 4. Her articles and essays have appeared in Huffington Post, The New York Jewish Week, Kveller, The New York Times, Newsday and other publications. In 2014, she co-authored the award-winning book, The Living Memories Project: Legacies That Last, and in 2016, wrote a companion workbook, My Living Memories Project Journal. She is a career educator and is proud to be both a teacher and student of history. She has also worked as a school administrator.

Meryl holds a BA from Queens College, an MA from Teachers College, Columbia University, and an Ed.D. from Hofstra University. She is a lifetime member of Hadassah and an active supporter of UJA-Federation of New York. She lives in New York with her husband, Stewart. They have three married sons and six grandchildren.

REPOST: It’s Time to Radically Rethink Online Book...
Guest Post: Who we Are