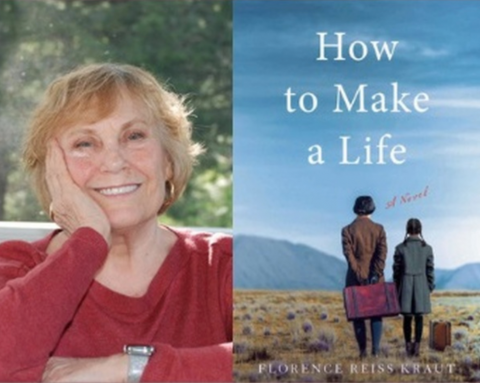 People who suffer from mental illness are individuals, they are not the illness.

Today Florence Kraut visits gilagreenwrites. I just finished writing my seventh novel titled "A Good Eye," which explores narcisstic personality disorder and post-traumatic stress disorder (specifically as suffered by veterans). As such, I was fascinated when I read about Florence's new book How to Make a Life and honored when she accepted my invitation to gilagreenwrites. Please welcome author Florence Kraut!

GG: I have interviewed several writer/therapists on my site. Do you work full time as a therapist and see writing as a hobby or how do you see the balance between these two elements of your life? Does one feed into the other?

FK: I am retired now, having spent 30 years as a therapist and a social worker in a Family Service Agency. I was an active writer of essays and short stories all during my career as a family therapist and then CEO of the large Agency, and I started my debut novel, "How to Make a Life," while I was working at the agency. I completed the fourth draft when I was retired. I never thought of my writing as a hobby, but more of a calling, something I was committed to and constantly working at. During my years as a clinician I also took writing classes and workshops continually, honing my craft.

The work as a social worker/therapist definitely fed my writerly self, helping me to create characters who are fully rounded human beings, with all the strengths and flaws that human beings have. It is the one mantra I have in my head as I write: Is this believable, would the character behave this way and why? And how can I make the people I write about someone my readers understand and care about? Being a social worker certainly helped me with that.

GG: "I wanted to show how this illness affects not only the ones who suffer from the disease, but also the ones who love them, live with them and try to help them." I took this from one of your interviews (Baroness of Books). This is intriguing. How do you advise writers to write about mental illness without falling into cliches or portraying a character as though the illness defines them, as though they don't have their own individuality outside of a mental illness. Do you have advice?

FK: This is very important to me. First, people with mental illness should not be defined by their affliction. They are full, rounded people who are suffering with an illness, but they also have talents, and abilities and personalities. The people I worked with as a social worker, although they suffered from mental illness, were all very different kinds of people, and as a writer we have to show the fully rounded person. So my advice is always to show the full character with their strengths (do they have talent, humor, intelligence) and their weaknesses other than their symptoms (are they flighty, impulsive, careful, frightened). If the character is a pianist, show what music and the piano mean to them and show how it engages them and others. In my book, Ruby has mental illness, but she is not always symptomatic. She is beautiful, engaging, warm, musical and loving. People who suffer from mental illness are individuals, they are not the illness.

Second I wanted to show that everyone in the family system who loves the person who has the problem gets pulled into trying to fix it. The solutions often become problems in themselves, and frequently affect the generations that come after.

GG: Did you learn something about yourself that surprised you through this writing process?

FK: First, I think I always knew I could complete a difficult task if I pursued it, but I didn't realize how much tenacity it would take, and how many times I would have to re-write and re-write. And second, and more important, I have always worried about what people thought of me, but as a writer I had to develop a hard shield so that I didn't take it personally when someone did not love my book or had a criticism of it. Even though I have had mostly positive responses to my novel, there are always some statements that wound. I have learned to let go of the idea of pleasing everyone. It is not possible.

GG: Do you think Jewish literature is too associated with trauma and disaster? Do you think there is a "fatigue" in Jewish writing because of this preponderance of trauma and tragedy? Do you think it turns off the younger generation? Is it something that worries you?

FK: There is a subset of Jewish writing that is concerned with the Holocaust and also other times of trauma and disaster in the history of the Jewish people. It is hard to avoid because there is so much trauma and tragedy in Jewish history, whether talking about ancient times, medieval times or modern times. I deliberately did not write specifically about the Holocaust in my novel, although as a saga that covers 100 years, the Holocaust was part of that time, because many people express that "fatigue." But I wanted to be true to the times, to be historically accurate. I see my book as focusing on an immigrant Jewish family who comes here fleeing a pogrom but goes on to make a characteristically American life. I have been told often by readers of other ethnicities that the immigrant story resonates with them, no matter where their family came from. So I didn't worry too much about the "Jewish trauma." The Weisman family, over these 100 years, suffers many of the life-traumas that afflict us all and are not particularly Jewish.

GG: How did you deal with sweeping such a large span of history as a writer? How did you decide what to include and what to leave out? Did you worry the book would be too long or skip important detail in order not to overwhelm the reader?

FK: Dealing with the large span of history was a huge challenge. I actually developed an Excel Spreadsheet to make sure I was accurate with my characters' ages and the events that happened in the world as the book went on (Woodstock, the Man on the Moon, 9/11, the Yom Kippur War). What was included and what was left out was dictated by the characters and the story arc. I was very cognizant of the length of the book, and in fact deleted two of my favorite chapters because they did not further the story arc and introduced two new characters. Those chapters are on my website, (see address below). I believe the Family tree at the beginning of the book helps to keep the characters, and their relationships to one another, straight. Thank you, Gila.

Thank you, Florence. I am sure many readers will find your book invaluable. I'm excited to read it myself!

Bio: Florence Reiss Kraut is a native New Yorker, raised and educated in New York City. She holds a BA in English and a MSW in social work, and she worked for over thirty years as a family therapist while writing stories and essays for publication. Then she retired to concentrate on her writing and travel widely. She has published personal essays for the New York Times and her fiction has appeared in journals such as The Evening Street Press, SNReview, The Westchester Review and others. She lives with her husband in Rye, New York.