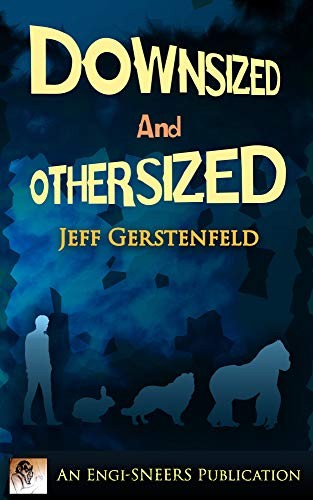 ​Today I'm excited to bring you an author interview with Jeff Gerstenfeld, a fellow writer in Israel writing in English. While I have not had the pleasure of meeting Jeff in person, I'm so pleased that he contacted me about his new book Downsized and Oversized. Often genre writers get sidelined and it's a great opportunity for me today to introduce a writer who is out there producing new genre work to a larger audience. Welcome Jeff Gerstenfeld!

After a lifetime working as an engineer, Jeff Gerstenfeld, going against everyone's rational advice and his own common sense, quit his day job to begin a writing career at the age of 62.

Jeff has the uncanny ability to find humor in the most unexpected places and displays this in his unconventional and entertaining writing style. Several of Jeff's earlier short stories were published on internet sites such as The Writers Voice and Clever Magazine.

Jeff's first published book is The Revenge of Richie Rabbit, a parody of children's cute animal story books. The main character, Richie Rabbit, steps out of line and gets his fool tail shot off, with the gunshot reverberating throughout the book. Richie chases the shooter, Pamela Bunny, from story to story seeking his revenge, demolishing each story's original plot and taking them in different, unexpected directions.

Jeff's second published book is Downsized and Othersized, the story of Joey, an arrogant system engineer, who is downsized from the human race and is reincarnated as a series of animals in his determined effort to return to his former life.

Upcoming books will be based on humorous and science fiction themes.

GILA GREEN (GG) What brought you to write this new novel? An inspiration? An experience?

JEFF GERSTENFELD (JG) At the end of 2002 after almost five years as a systems engineer at a respectable telecommunications company, I was unexpectedly downsized. They say "when life hands you a lemon, make lemonade". My lemonade was writing a cynically humorous short story about Joey, a systems engineer that's downsized – not from his job, but from his life, and with no human transfer positions available he agrees to come back as a rabbit. I published this story on two internet e-zines at the time, with very favorable responses.

After a year and a half of job searching, I finally got a new engineering position. And old friend who had read this "Downsized" short story suggested that now I continue the story, and thus, my book "Downsized and Othersized" was born.

GG: Are you exploring new themes in this new novel or similar themes from a different angle? What are those themes?

JG: My first book, "The Revenge of Richie Rabbit", was a completely different type of work, with the only common theme being rabbits. When I originally wrote that book, we had rabbits running free in our backyard, all the offspring of a pair of rabbits someone gave us as a gift. I learned at that time that what people say about rabbit propagation is completely true. So we quickly had a backyard full of tens of rabbits, and I guess I had rabbits on my mind.

JG: Hopefully humorous and entertaining. There is some dark humor in it, but basically it's an optimistic book where the main character never gives up hope to return to his human life.

GG: Have you added or deleted anything from the novel that has surprised you?

JG: There is an emotional part when the main character is reincarnated as a dog, that did surprise me when I reread it. The rest of the book is all goofy, light-hearted humor, and I couldn't believe that I wrote this serious, melodramatic segment. But it did help to round out the main character, and added a lot to the book's credibility.

JG: Definitely. There are quite a few references to engineering human resource department (called "animal resources" in this book) position transfer policies.

GG: Are there any characters in this book your readers have seen in previous novels or variations on those characters?

JG:Yes. Richie Rabbit makes a brief cameo appearance during a dream sequence in "Downsized and Othersized". In "The Revenge of Richie Rabbit", Richie chases Pamela Bunny from story to story, while he himself is chased by other characters. Richie pops into Joey's dream looking for Pamela, but is ordered to return to his own book.

Thank you, Jeff. I'm sure readers will learn a lot about how to take lemons and make lemonade from reading your work—a lesson we all need to review.

Learn more about Jeff on his Facebook page Engi-SNEERS

What I learned from my Second Book Launch
Roundup: Recent and Anticipated Author Interviews